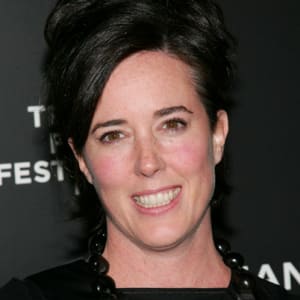 Indeed, we should question why so many celebrities choose death by hanging.  One of them was Kate Spade.  She hung herself with a red scarf.

A rather dramatic end.  Apparently Kate Spade was rather demure and didn’t go in for that sort of thing.

Maybe it was a calling card from the killer(s)? To tell everyone in the know exactly who it was? As a warning to others?

In order to do a proper investigation one needs to pull back and look at the big picture.  What is the mainstream media saying? What are they claiming? Sometimes you can get the biggest clues from what they do or do not say.

We learned very quickly from New York Police Department (NYPD) lead detective that detectives were still in the early stages of the investigation but that all evidence pointed to “a tragic suicide.”

And law enforcement officials said she left a note at the scene. The officials were not authorized to speak publicly and spoke to The Associated Press on condition of anonymity.

The officials didn’t know what the note said.

The contents of the note were then leaked to the press. Apparently there were different versions of what the note said.

But apparently they did know what the note said:

“At this point, there was a note left,” the department’s chief of detectives, Dermot Shea, told the Post. “The contents of that note, as well as the physical state of the apartment and the comments of the witness, lend to the credibility that it is an apparent suicide.”

“I have yet to see any note left behind and am appalled that a private message to my daughter has been so heartlessly shared with the media,” Spade’s husband, Andy Spade, said in a statement to The New York Times on Wednesday.

Really? Then why is it that CBS was reporting that:

Housekeeping staff found Spade inside her Park Avenue apartment in Manhattan around 10:20 a.m. Tuesday, law enforcement officials told CBS News. They said she left a note at the scene but the contents of the note were not divulged. She had apparently hanged herself with a scarf attached to a door knob. Her husband and business partner Andy Spade was in the apartment at the time, police said at an afternoon news conference.

Andy Spade then steps out in a mouse mask two days after his wife’s death. Why? It certainly wasn’t a disguise.  Everyone would have known who he was. Was it a message to someone? 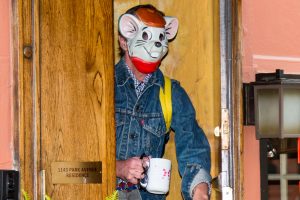 Apparently the mask is of a character, Bernard, in a film called The Rescuers. A Disney film that is about the Rescue Aid Society, an international mouse organization headquartered in New York City and shadowing the United Nations, dedicated to helping abduction victims around the world at large.

A mouse mask. Is this a game of cat and mouse? Who is the cat? Is this a plea for help?

Andy Spade, and his brother, David Spade are from Birmingham, Michigan, a very exclusive and wealthy suburb of Detroit, Michigan. Detroit Michigan is home to the Detroit Masonic Temple, the largest Freemasonic Temple in the world.

Birmingham, Michigan is also home to alleged occult, ritual child abuse, and mind control activity according to various victims who grew up in that area.

On page 4 of Color Symbolism in Freemasonry by Leon Zeldis, we learn that, The color of blood is naturally connected with the idea of sacrifice, struggle and heroism. It also signifies charity, devotion, abnegation – perhaps recalling the pelican that feeds its progeny with its own blood.