The past is the future unless you learn history—real history, not the sanitized, fake version. There is reality and then there is fakery. Theatre. Which is best for the stage. But there are those who believe that reality is a theatre and life is a constant LARP (live action role play).

Currently it is in vogue to topple statues. What is the point of toppling statues when we can take the young, the current generation, to a particular statue and tell them the history behind the individual that the statue represents? Why should we ‘sanitize’ the environment when we can say “Look, this evil person did this and this and the other thing.” This is a potent learning tool.

One particular statue deserves mention. This statue is of Albert Pike, 33 degree Scottish Rite Freemason and founder of the Klu Klux Klan (KKK). There is a very deep history behind this individual everyone should learn about. Because when you unravel the thread it connects the man to a wider freemasonic, and therefore globalist, conspiratorial tapestry.

To begin this story we go back in time to the 1800s. We will start with a lord from Britain. This Lord Palmerston of Britain liked to make theme parks. Disneyfied versions of culture and race the British could control. He decided to make a project of the Jews and Israel. Apparently the Jews did not know they needed a place called Israel. During the time of the civil war most Jews were pro­-Union. In fact, Jewish soldiers in the Union Army were intensely proud, mostly German-speaking immigrant, anti-­slavery Republicans.

Well Lord Palmerston decided to change all that. He needed to manipulate Americans and Jews to see things differently. So as British Foreign Minister, Palmerston launched Zionism in 1840. He wrote that the Jews desired to return to Palestine (Abba Eban points out that the Jews knew nothing about this); and a month later, lo and behold, the British landed troops in Palestine for the first time.

This British project matured in the mid-1850s, and its active focus shifted to the West. There were two important partners instigating things: Isaac M. Wise, a B’nai B’rith Midwest leader based in Cincinnati; and Killian H. Van Rensselaer, a British military operative and Scottish Rite Mason northern leader, also based in Cincinnati. Between 1854 and 1860, they spread a pro-slavery, secessionist-terrorist group along the route extending down the Mississippi valley to Louisiana and Texas: the Knights of the Golden Circle, an organization that later morphed into the Klu Klux Klan (KKK). Wise’s B’nai B’rith organization spread southward along the identical route. Their plan was to spread slavery into Latin America and the U.S. West, and break up the U.S.A. into several small countries. In Louisiana, U.S. Senator Judah Benjamin and Scottish Rite Southern Mason leader Albert Pike worked together on this terrorist secession project.

After the war, the Ku Klux Klan was started up in Tennessee to stop newly freed blacks from voting. With their occult­ satanic rituals and costumes, the KKK burned and tortured blacks and pro-U.S.A. whites. The Klan’s national headquarters was in Memphis, Tennessee, where KKK leaders Albert Pike and Nathan B. Forrest lived and attended the lodge together. 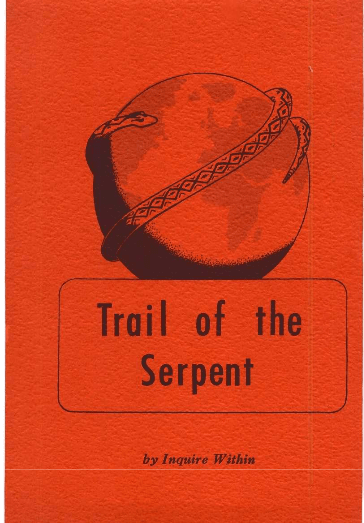 THE TRAIL OF THE SERPENT

This is, hands down, the best book I have read concerning secret societies. If you are confused about world events and wonder why humanity is ensnared in what seems like a downward spiral…Read this book! Many people who join these societies will be surprised they are simply dupes, usable energetic ‘bits’ for a ‘greater cause.’ If you wonder why Western Civilization and Christianity is being viciously attacked…Read this book! You’ll find the answers here on how they operate and why.

And may God Bless You.

As the three grades of ordinary Masonry included a great number of men opposed, by position and principle, to every project of social subversion, the innovators multiplied the degrees of the mystic ladder to be climbed. They created occult lodges reserved for ardent souls … shadowy sanctuaries whose doors were only open to the adept after a long series of proofs calculated to test the progress of his revolutionary education.

In all he did, in all he taught,
he kept this aim in sight :
To get the deeds of darkness done, disguised as works of light.
He spread his poison, slow and sure, through many a specious sect,
And made the evil seem the good, bamboozling God’s elect.

The Coming of Lucifer. By X.

JonBenet Ramsey.  A little girl murdered in 1996, whose murder caused an international sensation because it was such a high profile case involving powerful people, is still awaiting justice. There were some poems given to investigators by an anonymous author who felt that perhaps disclosure disguised by poetic means would help solve the case or at least identify what was going on by those scared and desperate people to afraid to come forward.  What follows is one such poem:

However, one must study greats
Take, for example, William Yeats,
Who spoke about Byzantium
No governor could stop the run
Your split in planning took its toll
Your race spun out of your control
Things fall apart

The antichrist lurks in the head
It festers in the carnal eye
Which takes young victims from their bed
To suffer that and then to die
Now vacant, half-glazed tears are shed
From ambidextrous author’s stead
One doll, now grown, hides in dread
Another Manchurian candidate
Is dead.¹

This poem hints at a powerful cabal, ‘religious’ and/or occultic, above what we would call government, but hides like a parasite within governments (what is left of governments).

The author speaks of William Yeats and is highly versed in poetic composition. The author is most likely very educated, part of the ‘elite’ ruling class, or is involved in those circles. Someone privy to understanding who or what is behind the stagecraft.

William Yeats, accomplished and well known Irish poet, wrote a poem called “Byzantium,” which describes the occult and human sacrifice. This poem alludes to secret societies and conjuring spirits — blacksmiths or “smithies” of the Emperor with their iron “In glory of changeless metal” complete the sacrifice of the “death-in-life and life-in-death ritual.”

The first stanza of the JonBenet poem describes a split. A layered ‘split’ which resonates through the centuries. A split that could be describing the Anglican Church which broke from the Catholic Church during the reign of Henry the VIII. This split had unknown, unforeseen complications, where “Your split in planning took its toll/Your race spun out of your control.” Race, meaning a competition, or a group of people — the stanza being full of double entendres.  Further poems given to investigators hint at scandals within, or involving a church and/or religion.

The Manchurian doll, referring to the manufactured mind-controlled female sexualized ‘type,’ may refer to Patsy Ramsey, or even the author, who most likely is a female, and describes herself as ambidextrous, or well-versed or studied in both worlds; able to experience and report back from these darker realms.

William Butler Yeats studied the occult and was acquainted with Aleister Crowley, who was founder of the religion of Thelema.

Read Presumed Guilty: An Investigatiion into the JonBenet Ramsey Case, The Media, and the Culture of Pornography by Stephen Singular, for further analysis, and for the rest of the poems mailed to investigators.

1.  Stephen Singular, Presumed Guilty: An Investigation into the JonBenet Ramsey Case, The Media, and the Culture of Pornography  (Kindle Edition)