Harmony Thiessen, of Golden Zen, contacted me asking if I would like to collaborate on a story with her.

How can I resist someone who learned Zen from a Golden Retriever?  Or has such a good story idea?

This is the story of an amazing women, who died this year at the age of 98.  She was nominated for the Nobel Peace Prize several times and never received it. 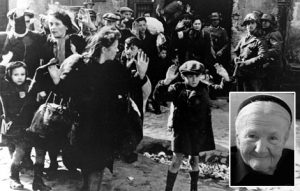 Her name is Irena Sendler and she was a social service worker in Nazi occupied Poland.  She was directly responsible for saving the lives of 2500 Jewish children.

How she accomplished this feat is simply astounding, and reads like something out of myth or legend.  But she was just ordinary person who was on a mission.  Irena Sendler was a hero, but she never wanted to be called that, she said: “Every child saved with my help is the justification of my existence on this Earth, and not a title to glory.”

Because she was a social worker, she had unlimited access to turberulosis contaminated areas.  Using this freedom, she persuaded Jewish parents to let her hide her children so they wouldn’t be deported to work camps.

You can imagine that Poland was crawling with SS guards so she had to be extremely careful.  She smuggled the children in ambulances (pretending they had typhus or TB), in burlap sacks – even in tool boxes and caskets.  She even trained her dog to bark constantly when she was questioned by guards so the guards wouldn’t hear the children crying.