I recently watched with interest an interview of Father Francoise Brune by Alexandre Lebreton concerning his book, God and Satan, The Battle Continues.  At the beginning of the interview he discusses Father Ernetti and his invention of the chronovisor (time machine).  I don’t speak French, and the machine translation is atrocious, but I got the gist of the conversation and was immediately intrigued.

Many people tried to discredit Father Ernetti. They called him everything from a downright liar to possessed by evil spirits.

Well of course I had to investigate this matter. I could tell from the material online that there was a probable misinformation/disinformation campaign going on.  I would just have to get the book. So I began to look for said book and find:

Apparently not on Amazon in the US. 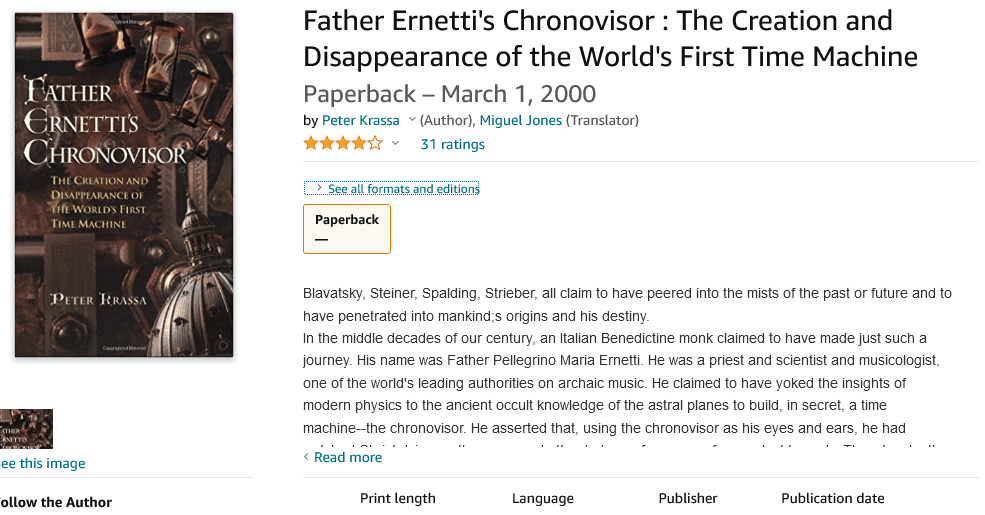 I finally found it at thriftbooks for $32.79. See what they charge six months from now. This message was posted right after I bought my copy.

It appears that someone is trying to keep this information from us. This ‘keeping of information campaign’ even appears a bit organized.

It was not my intention to give a review of the book, but give my impressions and ideas of the material. Peter Krassa writes an engaging account of Father Erletti and the story of the chronovisor in the first half of the book. Which is what I was looking for in lieu of the deceptive information online. But in the second half of the book he delves into occult thinking and theory trying to decipher what is going on with the chronovisor. He keeps tracking back to the ‘ether’ and the ‘akashic records.’ He also seems completely enamored with the luciferian Helena Blavatsky, who he mythologizes into some sort of avatar. Blavatsky teamed up with Colonel Henry Steele Olcott, the man who investigated President Lincoln’s assassination. These two teaming up and starting the Theosophy Society is intriguing in and of itself and opens up a whole new can of worms.

This is what author Peter Krassa says about Blavatsky:

“Blavatsky wrote a great deal of Isis Unveiled with Henry S Olcott, who sat across from her correcting drafts. We are hard-put to doubt this former Army colonel and first-rate journalist, who was well-enough respected by his peers to be chosen one of a three-man committee investigating Abraham Lincoln’s assassination…”¹

Apparently Krassa missed out on a key bit of information concerning Blavatsky and Olcott:

“Colonel Olcott, a co-founder of the gnostic Theosophy movement with Russian intelligence operative Madame Blavatsky, was head of a commission that was founded to look into the Lincoln assassination, and which buried all the relevant truths about why Lincoln was assassinated.”²

Perhaps the ‘ether’ and ‘akashic records’ of which the occultists speak are nothing more than the space/time contiuum of which events are ‘recorded’ into the fabric of God’s created universe. This would explain reincarnation, where when a person who taps into this continuum believes he is accessing his/her past ‘lives,’ when in actuality he is just tuning in to a specific space/time event, much like with Father Erletti’s chronovisor.

R2-D2 Acts as a Chronovisor

All of this really shouldn’t come as a surprise. What do you think the government has been up to since astronauts have visited the moon? And this was in 1969. I remember it on the little black and white TV we had.

The government lies and keeps information from us. That is a fact. Nickola Tesla had advanced technology 100 years ago. Why are we walking around with ‘cell phones’ that track our every move and ‘entertain us’ with people dancing on TikTok and what not? Is it because they wanted us to be well fed animals entertained on the farm so they can use us as experiments like on The Island of Doctor Moreau? Apparently H.G. Wells knew what he was talking about, being an insider and all, like George Orwell of 1984 fame. Nice of them to give us advance notice in their ‘fiction.’

Apparently Enrico Fermi and Wernher Von Braun helped in the construction of the chronovisor. You can be sure these two men, along with the others who helped in the design of this instrument, knew very well about the experiment on the USS Eldridge. Unlocking the space/time continuum is the ultimate secret that various cliques and cabals want to have in order to have supreme control over the planet and over everyone.

Sounds kind of like a certain fallen angel, doesn’t it?

So much disinformation/misinformation surrounds advanced technology. And as an aside, I don’t think Nikola Tesla contacted ‘aliens.’ I think the powers-that-be try to promote this alien agenda for various reasons.

What the CIA Finders cult was was essentially part of the MKUltra program honed and refined after WWII.

There has always been human sacrifice in the dark occult, and it was promoted and developed along with its mind control aspects on an industrial scale after WWII. This was because the scientists associated with the program along with various physics and psychic research came to the US after the war in a world wide divvying up of talent. In the US it was called Project Paperclip. This was part of the aspect of the military industrial complex that President Kennedy knew about and attempted to warn the public about.
These programs are all related and many are fused together. We are taught that they are separate disciplines but really they are not.

The leader of the Finders group was Marion Pettie.  He basically was the master of the games being spun out of this particular program. In the CIA operations are called ‘fun and games.’ Marion Pettie may have been fleshing out what is now known as Live Action Role Play (LARP).

“The Finders have more-or-less rational explanations for even the most bizarre behavior attributed to them, especially in the context of a group that exists to challenge social paradigms. Even the goat sacrifices, known as “Goatgate”to the group, have been attributed to the Finders just play-acting at being witches and warlocks, another “game” to dumbfound lookers-on.”

Indeed, he was also involved with computers and networks and it is quite obvious to anyone paying attention that in thia age of the Internet and Artificial Intelligence (AI) it is quite easy to run LARPS on the unsuspecting public.”

Apparently Marion Pettie was introduced to the Office of Strategic Services, (OSS, pre-CIA) through Nick Van Neumann, John Van Neuman’s brother. John Von Neumann was probably one of the most intelligent physicists and computer scientists ever to walk the face of the Earth. Legend has it that as he was working along side Einstein he used to play Prussian marching music to piss him off. Von Neumann was a National Socialist while Einstein’s political views were more Zionist in nature. Thus Einstein became the poster child of modern physics and quantum mechanics.

Albert Einstein and John Von Neumann were believed to be involved in the Philadelphia Experiment and the Phoenix Project.

Marion Pettie then met Charles E Marsh, who ran the best private intelligence network of that time period. Marsh’s mentor was the infamous Edward Mandell House, who had negotiated the Versailles Treaty and was a confidante of President Woodrow Wilson, the president who sold America out to the Federal Reserve, a foreign owned banking cartel.

Marsh gave Pettie money to purchase hundreds of acres of farmland in Culpeper County, Virginia. Interestingly, the CIA’s training grounds are called ‘the Farm’ and are located in Virginia.

Marrion Pettie’s son also worked for Air America, a CIA cut-out company. It is unknown if he was a pilot or worked in some other capacity. Air America most likely was used to transport illegal contraband such as drugs and/or humans.

It was Ted Gunderson who discovered the Finder’s Network of operations when he was working the Franklin Cover-Up case.  He was called in as lead investigator on Franklin when private investigator, Gary Caridori, who just had a major break through on the case was murdered in a plane crash along with his eight year old son shortly after takeoff out of Chicago.

It is believed that these cases involve an ongoing international pedophile/murder racket/ring, intelligence services and corporations/banks that are intertwined in a worldwide network of dark occult murders.

Must Read from a Montauk Insider: