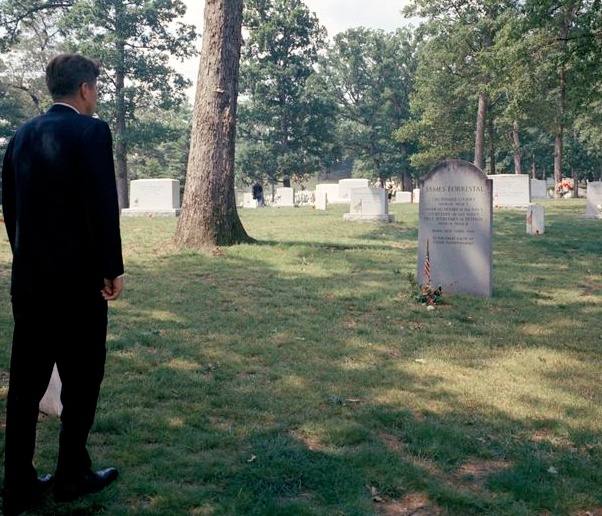 L Fletcher Prouty said that he could solve President Kennedy’s murder in 7 or 8 hours. He was correct. The obvious contamination and mishandling of the crime scene — as in so many false flags (9/11),  is readily apparent in what the perps modus operandi (MO) truly was.

One of the first people I’d drag in for questioning is this guy, Lyndon Baines Johnson:

Why? Doesn’t the video describe his evil Darth Vador intentions?  The hand gestures and creepy voice theatrics are an added bonus.

Not only that, but they were sneaking up on everyone like JFK had said:

Lyndon Baines Johnson was very interested in securing dominion over planet Earth via the military industrial complex, while Kennedy was working on dialing down the war in Vietnam, making sure Israel did NOT get nukes, and was working on scientific collaborative efforts with various countries regarding scientific advances in space related technology.

James Forrestal, United States Secretary of the Navy, was friends with JFK, who at one time was in Naval Intelligence, (ONI).  Did he tell JFK of this tightly knit, secret cabal’s plans? A cabal that operated outside of legal and governmental jurisdiction, which in fact is the global deep state. Did he know of these things, along with perhaps Werner von Braun?  Of whom Kennedy gave a long searching look when meeting with him at the NASA facility to peruse the latest gadgetry. Remember, it was Werner von Braun who briefed Carol Rosin, who had worked closely with von Braun in alerting the public to the secret world of the military industrial complex. And it was Forrestal who went to Germany to bring back Nazi Paperclip scientists.

So in light of all of the above, could the alleged ‘UFO crash’ in Roswell, New Mexico, in 1947, have been a false flag, a psyop, to create the secrecy and structure of a corporatized deep state that was needed to develop the secret space programs?

Who were these people, these entities of the ‘highly efficient machine’ that JFK spoke of?  The people that had everything to gain in privatizing defense, perpetual war, and the technology of mind control.  Basically turning the economy into one of war profiteering.

The people today, that back in the day, may have plotted his demise, and may have been there on the scene of his killing, like Gordon Novel.  He is seen in the picture below palling around with John B Alexander, who apparently switched careers from being a hard core mercenary, to becoming a thanatologist (one who studies death).  Alexander is also associated with Robert Bigelow’s Skinwalker Ranch.  And it was Gordon Novel, who, suddenly in a philanthropic mood, wanted to give free energy to the masses and solve the energy crisis, but was inconveniently harassed by the CIA for his efforts.

The woman sitting with them is Alexander’s wife Victoria, who at one time wrote a blog called the Devil’s Hammer. She is acquainted with the nuclear physicist Edward Teller, seen below.  Wonder if they’re discussing the links to the occult and physics?

The people who planned Kennedy’s murder designed the ritual to generate the largest amount of trauma to gain the greatest energetic outcome from the event which they used for their dark occult purposes. This then set the stage for the evil corporatized space program entities to make their debut.

This is the world in which we find ourselves.