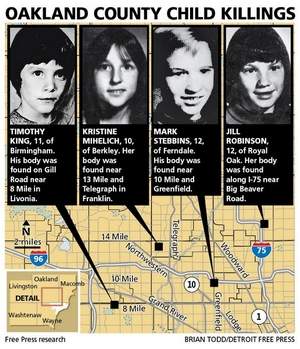 The Oakland County Child Killer (OCCK) case. A case on par with the Franklin Cover-up and so many others. It was a case during the 1970s that you did not hear about very much, unless you lived in Michigan and most specifically the Detroit area, where everyone was terrorized.

You didn’t hear about the OCCK case because the case was successfully covered up.  How did they do it? Well unpacking that is disclosing an almost successful psychological operation, but one that now is unraveling very quickly. And make no mistake, many people are concerned, because it involves peeling the mask off the face of complicity in nothing less than rank evil. Yes, the stench of it is all pervasive.

The grand finale in the case came when Christopher Busch, an OCCK suspect unknown to the victims families, was found allegedly ‘suicided’ in his bed.  The OCCK task force that was in charge of investigating the case was then summarily closed. Many years went by. The families thought the cops were diligently working on this cold case and never thought to question the investigation. It was felt the case was in good hands.

Then, the first crack into their psychological operation was exposed when a family friend of one the victim’s families happened to run into a man at a polygrapher’s conference who said he had polygraphed a suspect of the OCCK case before the last victim, Timothy King, was murdered.

Suddenly a deluge of information came out regarding a certain polygraph of the forementioned suspect Christopher Busch that the victim’s families did not know existed until this information was exposed.

“… someone missed redacting a “Larry,” but I knew as of July 2006, before the cops ever got involved in this, that Larry Wasser is the polygrapher who talked to Patrick Coffey about the OCCK case in July 2006. And we tried for a year to find a way to get some information about what Wasser said without naming him directly or involving the cops early on, who, as you might have figured out by now, are not always that helpful in this case.

The families of the murdered kids found out there was someone named Christopher Busch who was a suspect.  Who was this Christopher Busch?  Why were we not told about him? Did he have information to blow the case wide open? Was this the reason he was ‘suicided’? Was he threatening to talk about what he knew about the Michigan pornography rings and snuff film rackets that he was most likely a part of? Was he becoming an extreme liability and had to be silenced at all costs so the truth wouldn’t come out?

The book Portraits in the Snow gives a good run-down of the Michigan mafia and it’s many guises from someone who was there at the scene—an insider.  The writer also discusses the revelation of the polygraph. 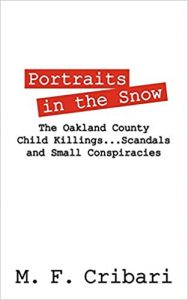 The latest psy-op regarding this case pertains to an statement of the very worst kind by none other than the Michigan State Police.  In regards to a well written and detailed non-fiction book about the case recently written by Detroit News journalist Marney Rich Keenan, a spokesperson for the police said: We don’t comment on fiction. Basically stating that 1. They don’t know the difference between fact and fiction or 2. The whole investigation was a fiction of which they were key players.

Indeed, Michael Hoffman tells us in his book Secret Societies and Psychological Warfare:

“This is what simplistic researchers miss: the function of macabre arrogance thumbing its nose at us while we do nothing except spread the tale of their immunity and invincibility further. That is the game plan operant here.

And regarding another polygraph of another suspect, John Hastings, which police said he had passed. But didn’t—it was inconclusive. Begs the question. Is it really possible to be that inept? Or is something more sinister at play here?

A pattern of mismanaged data, thrown away evidence, and leads not properly followed haunts this case.

“I will say this: It took lawsuits, appeals, over $11,000 plus attorney fees to get a pile of redacted documents from the Michigan State Police. A pile of documents wherein they neatly tucked photos of my brother’s dead body.