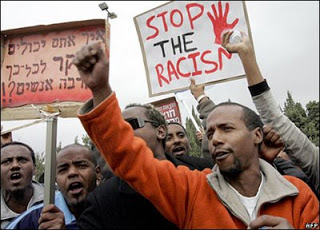 Are your ancestors European? Would you like to go back and visit your roots? HALT! You are probably too white and won’t be welcome. Yes, sorry, but according to some Jews Europeans are too white and this dangerous white supremacy trend must be stopped. Why? Because they said so!

That’s what some Jews (mainly in America) like to say about Europe. But ironically they also like to say they aren’t white when they live in America (because it’s convenient for them to say that here).

But hold on, they also like to say that Israel is special but A they don’t particularly like black people there and B don’t want any of the immigrants they push on everyone else.

Zionist Christians are their main supporters of Israel in the US, and they also tend to be the most nationalist.  Which at first glance may seem strange, but the powers that be exploit this situation to make people angry and yes, you guessed it, create more ‘anti-semitism,’ (a highly weaponized word if there every was one) than existed in the first place.  They then use this anti-semitism to clamp down on people and take away their rights.  So guess who wins? Yes! The Zionists!

And the Zionists also like to keep you in this perpetual Zionist versus Anti-Zionist argument, of which both sides they control.

Ashkenazi Jews are not white – Response to Haaretz article

Christian Zionism: The Heresy of Choice for Neocons

But, not all Jews feel this way.  Zionists are what we mainly see in the media. Torah Jews do not believe this. But why don’t we hear their voices? Is it because Zionists don’t want us to?