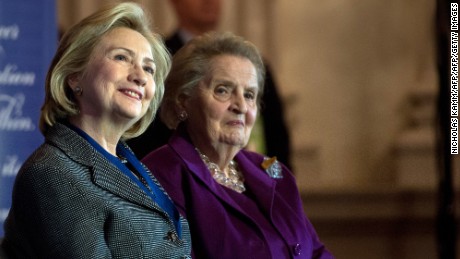 Here we see evilly Madeline Albright instruct women to vote for Hillary. Because she has their backs.

Maybe to have a bunch of kids for the evilly US War machine is what she means. She is a completely evil woman.

But apparently she doesn’t care about these women or children.

“In its endorsement of Hillary, the New York Times editorial board did such a sloppy job I can’t help but think it may have done permanent damage to its brand. Upon reading it, my initial conclusion was that the editorial board was either suffering from Stockholm syndrome or merely concerned about losing advertising revenues should they endorse Sanders. Then I thought some more and I realized my initial conclusions were wrong. Something else is going on here, something far more subtle, subconscious and illuminating. The New York Times is defending the establishment candidate simply because the New York Times is the establishment.”

Evilly Hillary Clinton is currently trying to out compete evilly Madeline Albright in who can kill lie cheat the most people.  Because let’s face it, the ends or justifies the means to these soulless sociopathic people.

They have sold their souls to this:

Yes, Virginia. There is a special place in hell for these two. Women.

Is Bernie Sanders a Warmonger?

Eagle One to Wanta – Movie Preview

There’s a ‘Special Place in Hell’ for Madeleine Albright

Carolyn, my daughter, with Shotgun Thomas

My husband Mike grew up in Northern Michigan in a rural area.  In his yard they had three enormous walnut trees.  Lots of nuts means lots of squirrels.  My father-in-law, in order to keep the squirrel population down, would take his shotgun out and shoot the squirrels.  People may think this is cruel, but the squirrels would cause quite a bit of damage to the house.  They would constantly try to break into the attic.  So every so often he would have to take out his gun and glean the squirrel population.  It’s called wildlife management.

When my husband was a kid he rescued a cat that eventually had kittens in their garage.  They kept one of these kittens.  At first my father-in-law called this kept kitten Damn Cat, then Tom Cat, then the more aristocratic sounding Thomas.  When Thomas moved up the name mobility ladder he was probably coming into the house and my father-in-law was getting attached to him.

That brings me back to the squirrels. Thomas soon learned that the sound of a shotgun meant a good meal.  When a gun was fired a squirrel fell out of a tree and Thomas would eat it. So whenever my father-in-law fired the gun at a squirrel, Thomas was right there by his side, kind of like a good hunting dog.

I told this story when I was in England to my students thinking they would get a good laugh out of it.  They looked at me in horror.  My training teacher (bless her heart) broke in quickly and said that they didn’t have this kind of culture in England, that only the nobles really hunted.  Which makes sense because the nobility  have large estates and there is very little public land in England.  I think the students thought I was a gun nut or a complete hick, maybe both.  But I did get a kick out their reaction.

After some time my father-in-law had to sell his house and move into an apartment in town.  At this point in time our family was living in Marquette, Michigan, which is about five hours north of Traverse City, Michigan, where he was living.  My father-in-law couldn’t take Shotgun Thomas with him, so we decided to adopt him into the family.  Unfortunately, the day of moving Thomas was nowhere to be found.  My husband was getting frantic, because he had to leave and come back up north to Marquette with the cat.  Someone got the bright idea of getting the shotgun.  A few shots were fired off and lo and behold Shotgun Thomas ran from the horse field across the road meowing enthusiastically up the driveway- with an eye out for dropping squirrels.  My husband scooped him up and the rest is history.

So whenever I hear about gun control and how guns are bad, I think of old Thomas and those walnut trees.

Annuit Coeptis:  Our project has been crowned with success.

The reason the Illuminati say that they have already succeeded, when they haven’t, is this: It is a common way of changing an energetical system by projecting what you want into the future.  That is why propagandists drop leaflets on a battlefield saying give up, we have already won, or business attorneys say it’s already a done deal.  They want you to think you have no power.  YOU DO. And they are afraid of you and your power.

The occult means secret.  It can be used for good or bad.  It is an energetic symbol system that manipulates energy.

The energy on a dollar bill is passed from hand to hand to hand. This strengthens the magick because everyone absorbs the meaning (physically and financially) that the New World Order has already won.

The pyramid represents perfection and the eye on the top says we watch everything.  Novus Ordo Seclorum. Annuit Coeptis.  The New World Order. Our Project is crowned with success.

What do you think they are trying to tell us?

The Illuminated Luciferians truly believe they have won this right.  It is up to you to resist and realize you don’t have to be a victim to their diabolical designs.  No one can do it for you.

The City of London Banksters built a worldwide web-of-debt system of interlocked central banking based on debt-based fiat currency according to secret Babylonian “money-magick” and usury. Babylonian money-magick is the creation of money from nothing and lending it to its actual owners at usurious rates. This is considered the greatest scam in history and the making money from nothing.